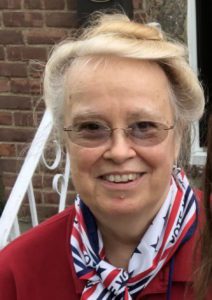 6/23/22 – The League of Women Voters of Port Washington-Manhasset is proud to congratulate our member and super-volunteer, Dr. Judith B. Esterquest, on being named to the Town of North Hempstead’s May W. Newburger Women’s Roll of Honor.

Judy has served our League as Healthcare Chair for five years, and her work on the issue throughout New York State and nationally led to her appointment as LWVNYS Issue Specialist for Healthcare. She also chairs the Website Committee and supports the Voter Services and Diversity, Equity and Inclusion Committees. She led the pivot to virtual, recorded candidate forums in 2020, and LWVPWM quickly became the state leader in virtual forums and voter outreach. As a member of the LWVNYS Rural Caucus, Judy helped organize a National Rural Caucus and advocates nationally for digital equity. At the 2022 National Convention, her teams sought to update the 1993 national healthcare position with language from New York’s 2021 positions and to adopt a national position on digital equity — both efforts prevailed.

Since 1994, 474 women have been named to the Women’s Roll of Honor, which pays tribute to women whose dedicated public or private efforts and community spirit have enriched the lives of all our residents. Judy joins at least 27 current and former members of the League of Women Voters of Port Washington-Manhasset who have earned this honor, including:

The LWVPWM congratulates Judy Esterquest and all of the 2022 honorees on this remarkable honor!